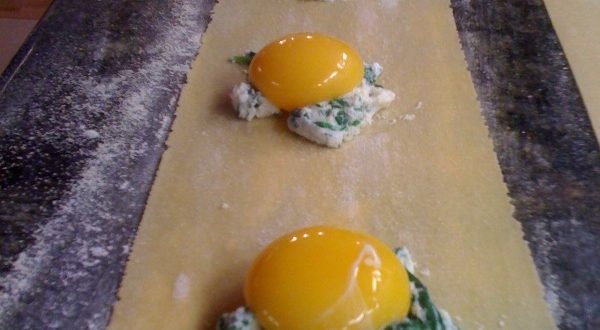 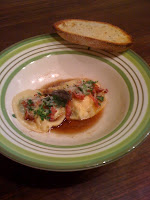 Armed with a pasta dough recipe, a pasta maker, and some free time, I was finally able to have some fun and play with the idea of ravioli. There was a technique that I have seen on a number of cooking shows like Iron Chef that I had to try. Raviolos is a variation on ravioli, with the stuffing consisting of an uncooked egg yolk, and other items. The idea is the yolk becomes a main component of the sauce for the ravioli.

So, I took to it. My go-to pasta dough recipe involves an even egg-flour ratio. 4 eggs, to 4 cups of unbleached flour, some salt and olive oil to flavor. I rolled out my sheets and was ready to rock. first task, was separating the egg yolks from the whites. These were then placed in ramekins off to the side. The second part of my filling was a ricotta-spinach base, which i would pipe into little molds for the egg yolks. My one mistake, came here. I got a bit to excited and antsy, and didn’t chop the spinach. Next time…

With my filling(s) ready, my sheets rolled out, it was go time for assembling these bad boys. Piping a small circle onto the pasta sheet, it was go time for the yolks. So, very carefully, I slipped the egg yolk on to the mixture, careful not to break it. So far so good, then it was time to top and seal. My second rookie mistake was not getting the 2nd sheet of pasta dough of uniform size… so, it was a little tight. But, on we went.

Topped, sealed, and now cut out with a circle mold, these Raviolos were ready. My sauce was going to be simple, and tasty. A browned butter with sage sauce was the majority of the liquid to be accompanied by the runny egg yolk. In addition, some crispy pieces of bacon, chopped fresh parsley, and some Parmesan would add texture, and color. And, who doesn’t like bacon!

The raviolos hit the boiling water for about 2-3 min. No accidents, they were looking great. Finally ready to eat, they were sauced, topped and accompanied by a thick slice of toast. At first bite, they were delicious. The egg yolk was wonderful in the brown butter and the bacon added the perfect amount of salt. If you are adventurous, try these. If you see them on a menu, order them! Lots of fun and a different way to enjoy a classic dish.