In June of this year I was selected to compete on Food Network’s new show, Cutthroat Kitchen hosted by the famous foodie Alton Brown. This would be my first ever exposure to a major broadcast production and the Food Network. I was extremely fired up and very anxious. The producers gave little information about what was going to occur on the show, and for good reason. The shock and awe effect of the craziness just adds to great television drama.

The cooking challenges were pretty straight forward, but with ‘devilish’ twists thrown in by Alton Brown. He would present to us a dish to make, we would have a panic filled 60 seconds to shop for EVERYTHING we needed, and then 30 minutes to execute the dish. However, before we started cooking there were three items up for auction which would hinder your competitors cooking strategy if you successfully won the item. More on this later…

After a long morning of rules, non-disclosures, kitchen tours and nervous pacing we finally got to meet Alton and begin our competition. He presented us with our cash and I can speak for all the chefs saying that our heart rates definitely started to climb. It was time to battle. Our first dish; ‘a perfect Burrito.’ I was fired

up. I knew exactly what I wanted to make, I knew exactly how to do it, and I knew I had more than enough time. I was feeling good. The pantry raid was hectic to say the least. What you can’t see on TV is how hard it is to get all of your ingredients in 60 seconds. Literally throwing elbows and grabbing anything and everything you see into your tiny basket. Luckily I made it out in time, and I was pretty sure I grabbed everything I needed. 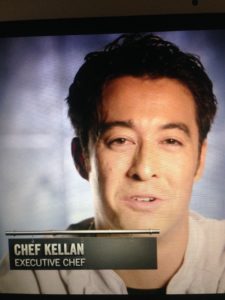 And now came the Auctions. The first item was 2 chefs knives. I was confident I could make this burrito with out the use of my knives so I stepped away and observed how the other chef’s bid up the item. $5k they went for, a bit too much if you ask me. The next item was frozen cocktail weenies. I wasn’t to worried about getting hot dog meat for my burrito, but I easily stepped away from this item when Chef Ma Le & Chef Greg got into a fierce bidding war. I knew the loser was going to get them, and I was correct. The last item was frozen burritos, where we had to use the shell for the tortilla. This was going to be difficult with out a knife. But, I laid back a bit and observed the bidding. All 3 other chefs got into it, but things got scary for me when Chef Greg bowed out. If I didn’t start bidding against the ladies, I was going to get these nasty things. So I won and saved Chef Greg by giving them to Ma Le, solely because Chef DiCarlo didn’t have tortillas. I didn’t want to give her something that would eventually help. 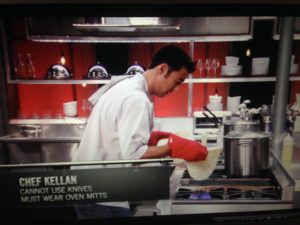 Finally we cooked. This was fast and furious. I was doing hot laps around the kitchen looking for items that would substitute for a knife. I pulled a board scraper, an oyster shucker and a grater. During the first 8-10 minutes I was doing pretty well. I had a salsa roasting in the oven, my protein was cooking, I had hash browns getting crispy; I was feeling good. And then another auction item came. Oven mitts for th

e remainder of the battle. Are you kidding? Well, cutting through it all they landed on my station. Chef Ma Le got me back for the frozen burritos. I don’t even wear oven mitts when I pull things out of the oven. Cooking with these things was a serious handicap. My plans for making my California Burrito upscale and elegant went out the door, and my main concern was to just be able to roll the burrito and put something on the plate. As time ticked down (FYI. The clock does NOT exist in the kitchen, you have to ask Alton for time remaining) I gave myself a solid 5 minutes to try and roll this burrito with those huge, red oven mitts. What you don’t see on TV is that it took me about 4 trys to find the process for rolling it into a passable and tight burrito. I looked around and I thought I was surely done. I was so upset and angry that I was going to get eliminated in the first round. I knew my only chance of making it through was if I got lucky on a technicality that Chef DiCarlo didn’t use a tortilla thus didn’t make a burrito. Well, I was right. Thank goodness.

I was feeling better a 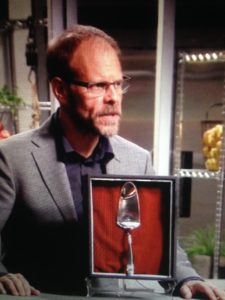 bout the second round. Ready for redemption, and genuinely excited to cook again. And then Alton gave us Pie. In 30 minutes. Fuck. Pastry is by far my weakest skill. Not gonna lie, I panicked inside the pantry. I just grabbed things I thought would help me make a dessert. And to top that panic off, Chef Greg took ALL of my hand tools and gifted me the Pie Scraper for the battle. Awesome. Luckily I made do, and crafted some spatulas and hand tools out of random parts of other bigger kitchen items. My proud moment was using a piece of a food mill to create orange zest (the graters were off limits too). I pressed on and threw together items that I could hopefully spin off as a pie. Meanwhile, I was getting accosted by Alton Brown the entire battle for making what he called a Cobbler. I pressed on, and made my dish as pretty as I could. I knew it tasted good, so I was banking on that to carry me through to the finals. However, when looking at all of the finished dishes 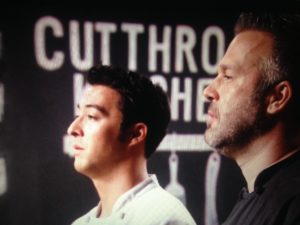 I was sure I was going to get eliminated by the same technicality that got me into the 2nd round. I was feeling a bit frustrated and upset that I was likely going to get tossed out of the competition. But I looked down at my dish and thought, you know I got something delicious and pretty on the plate. If I am going home, I knew I would be eliminated for a dessert. Head high, fuck it. Judgement went as expected, but I didn’t realize that Chef Ma Le had completely botched her crust. Holy shit, I’m in the finals. Fuck yes. I am winning this.

The finals. Alton announced it was going to be a Teriyaki Bowl challenge. Teriyaki was one of the first things I ever learned to make. I could smell victory. The pantry raid this time was a little more methodical for me. I knew I wanted to get every sauce component first so I wouldn’t be scrambling at the end of 60 seconds and not grabbing soy sauce or something vital. Chef Greg had gotten to the proteins before me, so the steak was gone, but I was pretty happy when I saw Salmon. I also took both packets of Sushi Rice, not knowing that Chef Greg had taken Farro. This would actually end up being useful after I was gifted some $11,000 coconuts. The coconut water sabotage was absolutely brutal. It was insanely difficult to get the husk off and get to the coconut. I had all of the line producers, both medics and three cameras around me on the floor as I wailed through the husk to harvest the water. Shit was flying everywhere. I couldn’t help but laugh, and also try not to hack off my fingers. I was real lucky that there was enough water in one coconut to cook rice with… I just prayed I had enough time to cook it. I believe I started my coconut water rice with about 21 minutes left in the battle. And, with all of the time it took me to harvest the water, I was behind in cooking the other components of my dish. But, I knew 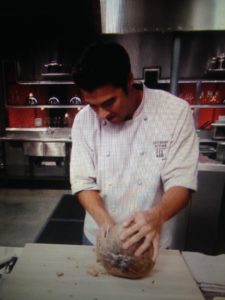 my sauce was good. So I pressed on. Not totally portrayed on TV, I pulled my rice with 90 seconds to go, and had to construct my plate after the rice had hit the bowl. I literally was down to the final seconds. If my rice was cooked, I was going to win.

Judging was a little more fun for me this round. I got railed a bit for the vegetables, but without any water and being pressed for time I thought I did a good job on the broccoli. Luckily Chef Tila made his

decision based on sauce. Once he said that, I knew I had won. Fired up! I was ecstatic and in shock that I was able to overcome all of the shit that was thrown at me. No knives, Oven mitts, no hand tools, a Pie Scraper, and that goddamn Coconut. This was no small feat. I got handed something detrimental in every round. And, I won. Between my boy scout background and my profession cooking in a different place every night truly helped and prepared me to win this competition. Also, being a former Division 1 water polo player helped fuel my competitive nature and ability to fight with my back up against a wall. 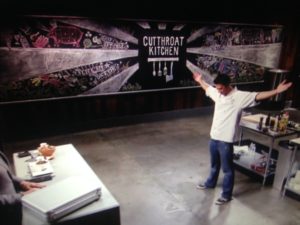 I have to say that I was very fortunate to compete against some incredible Chefs. They are all extremely talented at their craft, and also good people. It was fun hanging out all day, I think we all agree on that.

I have been apart of a number of different advertising productions, but this was my first experience with a TV show. I have to say, the production team was incredible. I can’t relate how great the producers were. Kelly and Mike especially! (hope you guys read this!). Huge kudos to everyone that works on the show, I thank you for such a wonderful and positive experience.

Until the next battle…?

If you haven’t seen Alton’s After Show, check it out as the sabotages were revealed to Chef Tila!