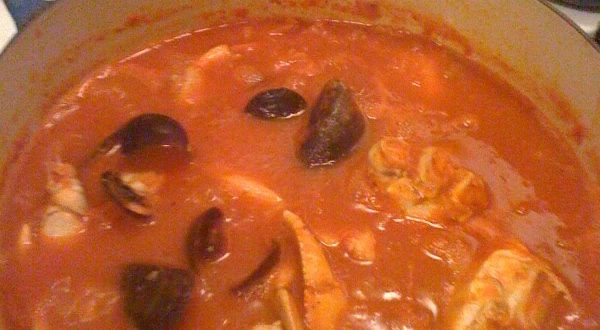 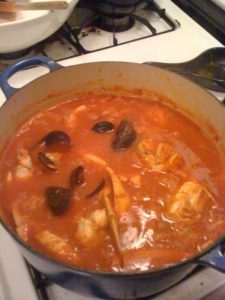 Its cold. Rainy. And Cold. What a better winter dish then a big pot of San Francisco Cioppino. San Francisco style because of the dungeness crab, and how it makes the stew very tasty. Having never made this dish before I called upon a few references. My good friend Travis is from Sicilian heritage and having had his cioppino last winter, I called on him for advice. His was of few words, keep it simple. Tomato sauce, white wine, garlic, maybe an onion, and fresh seafood. He added a few other suggestions on what he likes, and one I found really intriguing was to put some fish in at the beginning of the boil. What this does is add a thickener to the sauce, as well as give a really nice foundation of flavor into the tomato based stew. I took his advice and bought some tilapia, mussels and two very large dungeness crabs. First starting with almost a handful of garlic, olive oil and half an onion. Then adding the tomato sauce, tomatoes, white wine, stock, and seasonings. I let this cook for about 45 min before adding the first portion of white fish. I added half of the tilapia, and then let it cook for about 20-30 min. Then added the crab and mussels letting them stew for about 15 min. My friends arrived with an abundance of fresh Italian style bread and nice red wine. And then we feasted. No one spoke for about 5 min after getting their first helping of the hearty stew. We went through a full roll of paper towels and the bread was torn into like the vikings would during a feast. It was outstanding. Not much else could be said, other than this one is a keeper.