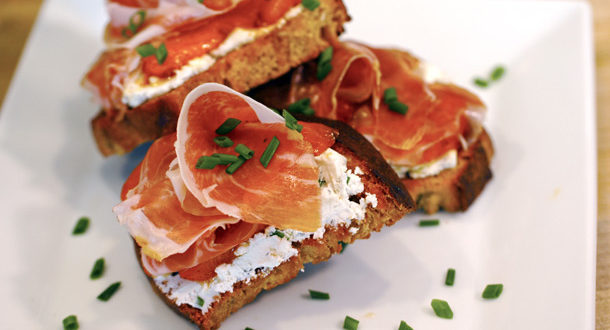 With lessons learned from the first shoot, the second Food & Wine Pairing shoot with Cameron Hughes went fabulous. The first wine that we were working with was Lot 259, a Riesling Chenin Blanc from Columbia Valley, Washington. When I tasted this wine my mind went immediately to apricots. They are in season and add a great tart and sweetness to go along with the sweet Riesling.

The dish had simple components, but elevated by a few techniques and ingredients. A molasses wheat bread from Uncommon Kitchen served as the base for the crostini. It was then topped with a local goat cheese which also had some fresh chives mixed in. Then the apricots. I decided to caramelize them with butter, brown sugar and a generous pinch of cayenne pepper. The pepper was a late addition to the recipe but adds a wonderful kick which aids in bringing out the sweetness of the Riesling. Finally, the crostini was topped with a paper thin slice of prosciutto di Parma.

This crostini turned out to be a fabulous pairing with the Riesling. The notes of the stone fruits in the wine were enhanced by the caramelized apricots and the savory cheese combination. Cameron himself went back for seconds and thirds! This is very easy to make. Try it at your next party!!

Combine goat cheese and chives in a bowl and set aside. In a non-stick pan, add the butter and brown sugar and stir until melted. Add the sliced apricots to the pan and coat in butter and sugar mixture. Add the cayenne pepper to the fruit once fully coated. Simmer on medium to low heat until one side of the apricot is golden brown. In the meantime, take the goat cheese mixture and liberally coat each crostini piece. Add the caramelized apricots on top of the goat cheese, usually about 3-4 for each piece. Top this with a nice slice of prosciutto and you’re ready to serve!