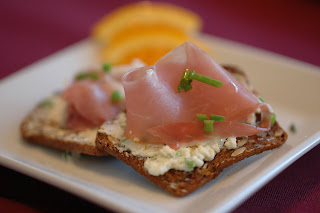 ot Roast nailed down as the centerpiece of the Holiday Meal offering, Blue Moon wanted to create a balanced meal using the other beers in the Holiday Variety pack. Pale Moon was one of the beers I was asked to use to bridge into a recipe. My mind went directly to appetizers, as it would be tough to use a bitter beer for a dessert. The lightness and citrus notes of the beer would pair well with a mild goat cheese. So, I constructed a simple crostini using whole wheat crackers and prosciutto. To make this app a little more complex, I added a tablespoon of the beer into the goat cheese, along with some fresh chopped chives, orange zest, and some clover honey. This was mixed well until soft, and then generously spread over the crackers. Topped with prosciutto, these tasty bites went over very well with my guests! The next portion of the meal was a pairing with the signature Belgian White. Consensus among the team was that a salad was in order. I used the orange notes of the beer as my guide and decided on a fairly simple spring salad with a hand crafted dressing. The salad was made with Arugula, thinly sliced red onions, slivered almonds, and orange supremes (just the flesh!). The salad dressing came together way better than I anticipated. Using fresh squeezed orange juice, Dijon mustard, a touch of honey, fresh cracked pepper, and a little white balsamic along with a high quality olive oil, this dressing was a hit! It paired awesome with the Belgian White. The holiday dinner went extremely well! Heavy encouragements to try these recipes soon!!

Kellan Hori
Personal Chef services for Lake Tahoe & San Francisco Bay Area I love to eat, I love to cook, I love food. The best meals are prepared with good ingredients and good intention. I like to cook for people who enjoy food and great company.