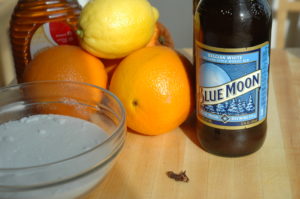 to express how excited I am about this recipe. Blue Moon came to me with an urgent project under tight deadlines for the big MillerCoors convention later this month. The project was to plan and execute their Summer Variety Pack four course meal that was going to be showcased at the convention. It was snowing outside when I was reading the request and speaking with the team, so it was a tough transition to begin planning a summer meal that was going to be featured in a very large setting. The pressure was on.

Over the last few winter months I had begun to think about an idea I wasn’t sure was possible, but was eager to have an opportunity to try. I wanted to make preserves using Blue Moon, or one of their flavorful beers. Because beer is bitter and at times complex, I didn’t know if this would work in a sweet dish like jam or marmalade. After a bit of research, I had my outline and headed into the kitchen. I settled on orange marmalade using the classic Blue Moon Belgian White. For obvious reasons, I thought pairing the two would work together nicely. I also wanted to bring out some of the complementary flavors in the beer, so I used some Clover Honey and whole cloves. The majority of marmalade recipes use water as the main component other than oranges, here is where I used the beer. No water, just beer.

During the course of cooking, I began to grow extremely skeptical. I was worried that my concoction wouldn’t become gelatinous enough and it kept tasting more and more bitter. Finally, during the last step of adding the sugar and honey, the magic happened. Ten minutes of bubbling away and my pot became a wonderful orange marmalade.

To bring this wonderful jam together, I served it in a grilled cheese sandwich made with Dark Rye bread, Prosciutto, and Fontina cheese. The sweet and slight bitterness of the marmalade paired amazingly with the saltiness of the prosciutto and savory rye bread. All tied together with a delicious melty cheese. I hope that you guys will be able to find this at stores everywhere soon!! If not, make it, it’s worth it.

A big THANK YOU goes to John Stocklin of Stocklin Photography for producing some amazing shots. All photo credits go to him! Thanks John!